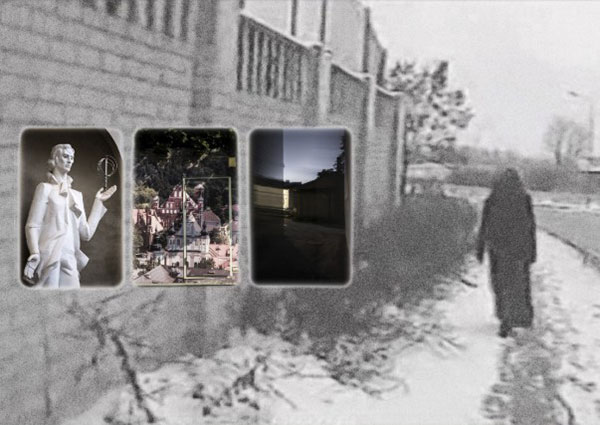 ‘World in a Room’ (Berlin, Germany)

The photographic work of Klaus W. Eisenlohr, Berlin meets the video work of Rimigijus Venckus, from Vilnius, Lithuania. Both artists work with a diversity of media, are active as curators and teach at art institutions.

The bonds between the works of the exhibition are the places in the Baltics, and a peculiar introduction of the (human) figure into those spaces. Venckus uses non-specific pictures of urban landscape of Lithunia for his pictures, often covered in snow and then often appears in the pictures himself as first person protagonist. Eisenlohr takes pictures of urban environments in the three Baltic capitals Vilnius, Riga and Tallinn and includes public figures, sculptures and other human figures on display into triptychs of day, night and figure.

The character that appears in Rimigijus Venckus’ videos is his personae as “the artist”, and he reflects on the relation of the artist to his urban, social and political surrounding. This is most apparent in his video “My Success Story”. In this work he puts himself as an example of someone who has committed himself to art and teaching of art, but who has received antipathy on professional and social levels. Working with male nudes in his widely recognized photo work and being openly critical, the artist has been confronted with resentment and hostility. In this way, the artist is also reflecting on the status of his country as a member of the European Union and a post-socialist society. “Lost in Action” is a more abstract film of a man shaking his head in motion blur. It may be read as meaningful gesture of denial or negation, at the same time it turns out to be a sculptural process, as the portrait shot becomes a contemporary moving bust. Another brand new video “The Letter” will combine dance performance and city scape, bringing together the classical figuration and urban space.

Remigijus Venckus usually focuses on the analysis of media as a technology. He often trying to reinvent the media as a new tool, which is helps to clearly express a personal position reference to time, space and memory. Probably the purpose of his creation is a question of memory. Remigijus Venckus said: I am trying to answers the question, who is a human nowa days. In conclusion, I can strongly say that my art is the analysis of myself and its evaluation in public.

Klaus W. Eisenlohr presents series of triptychs from the 3 capitals of the Baltics Tallin, Riga and Vilnius. The series was conceived during a trip through the Baltics in 2014 and reflects Klaus W. Eisenlohr’s interest in urban space and places beyond the common tourist shot. Looking for spaces and places, the artist recorded images of daily life, of corners and plazas reflecting the atmosphere of contemporary life between tradition and (post-)modernity. At the same time he took “portrait images” of figures in public live: of sculptures, photographs and graphics. Those human figures on public display seem to be very present to the artist and he thus choose to include them in his photographic series. In a witted way, the “portraits” of human figures seem to both fulfill and disappoint the expectations most people have towards human representations in street photography.

It is now 14 years that the 3 Baltic states joined the European Union. After a big interest in the German  media for these countries in the years after the expansion of the union, it has become very calm in the more recent past. In the turbulent political discussions about the European Union, the governments of these states are rarely being mentioned, as it happens to most of the Eastern European countries. It may be even more interesting , in the time of skepticism against the EU and reemergence of political populism to reflect on the urban life of Tallin, Riga and Vilnius, again. In this way Rimigijus Venckus and Klaus W. Eisenlohr become emissaries on a subversive mission. 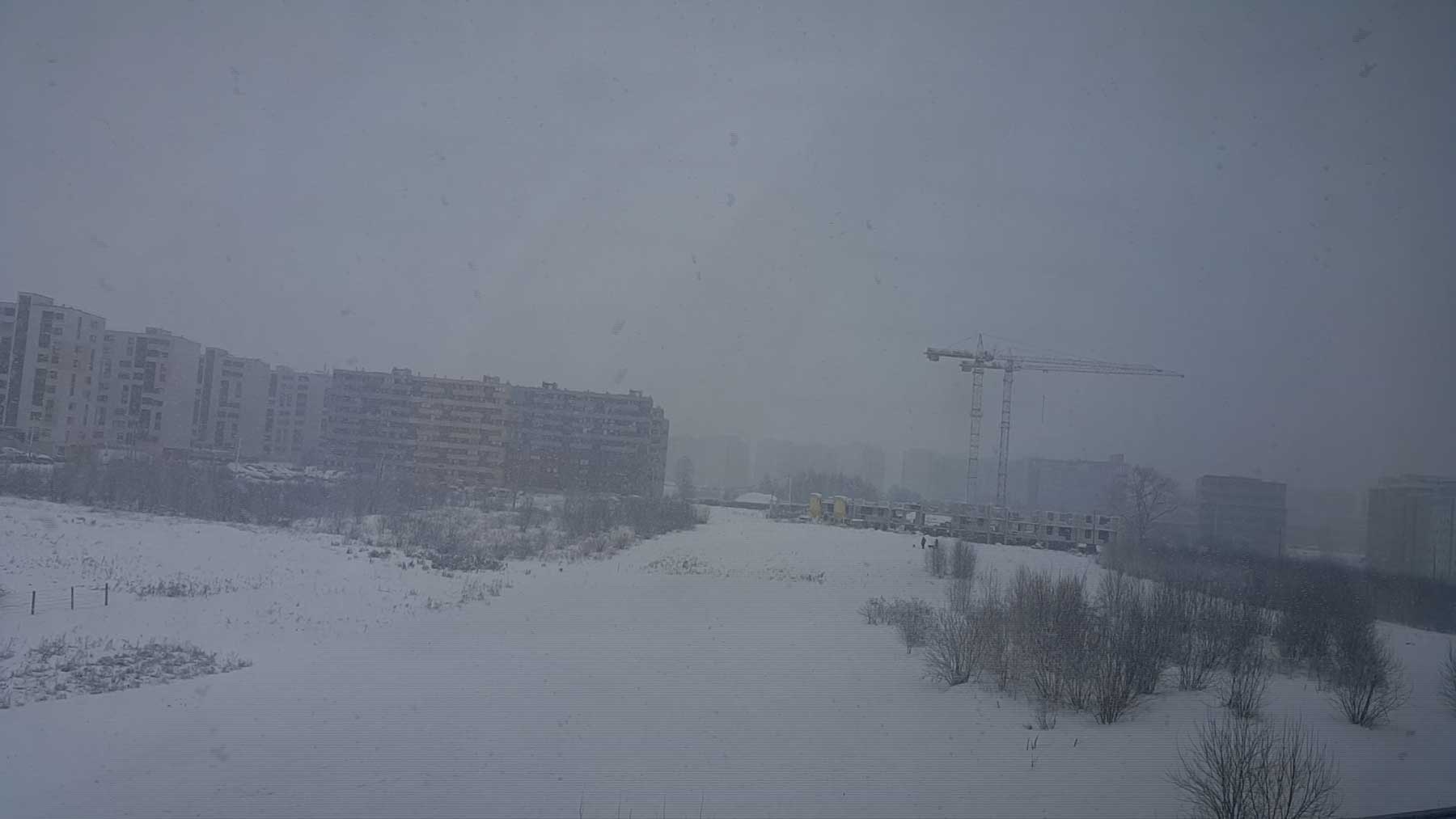 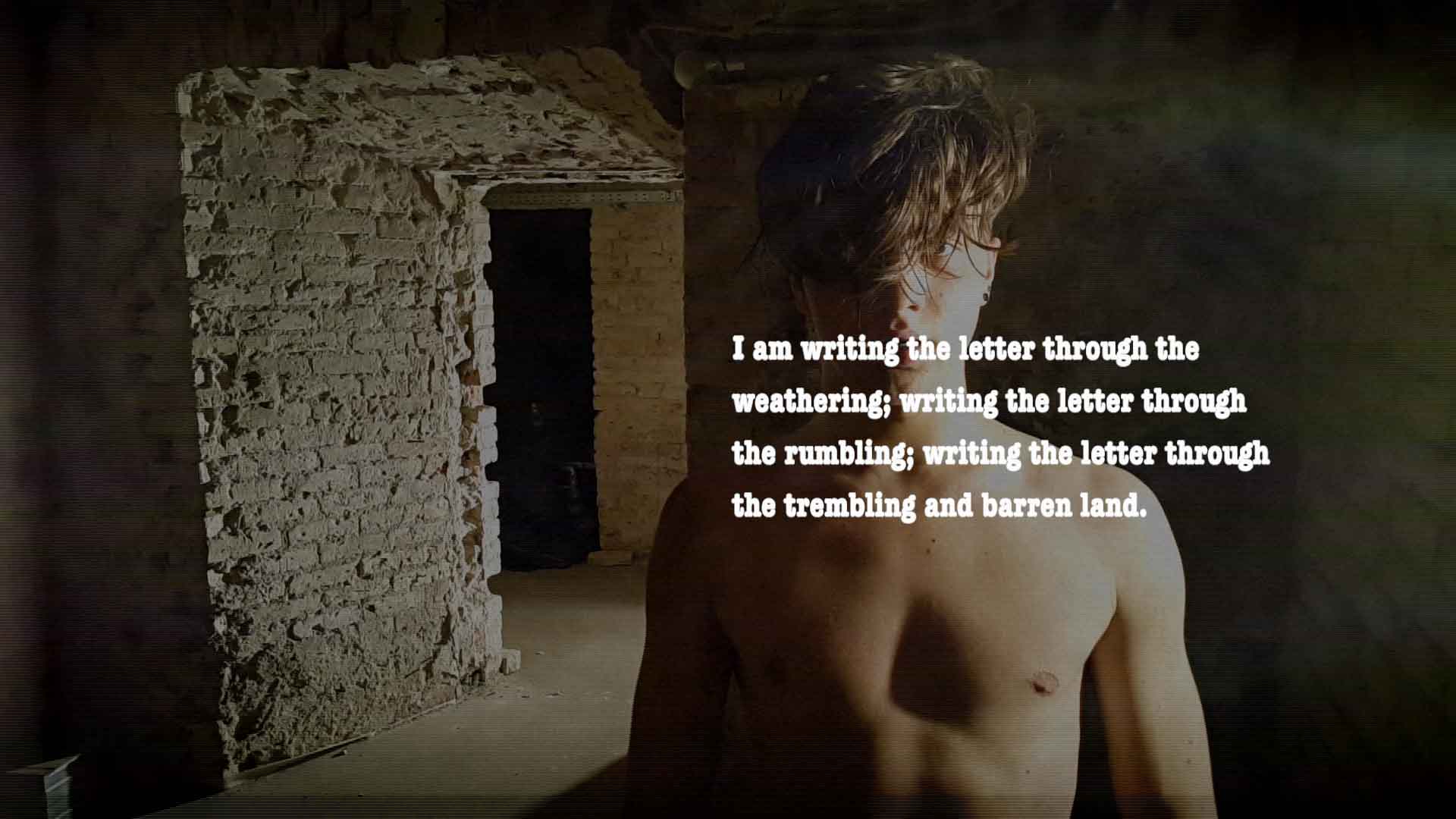 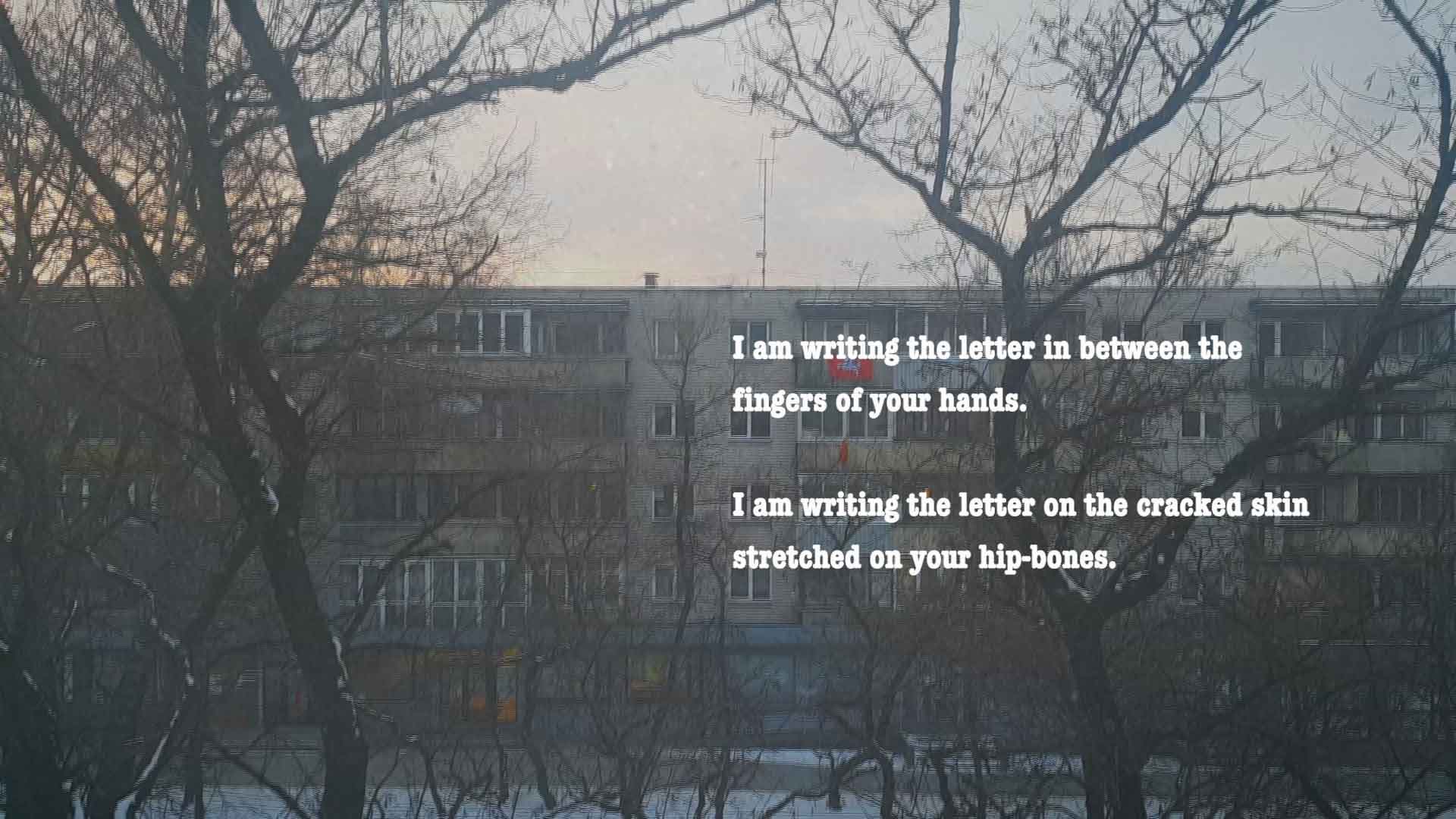 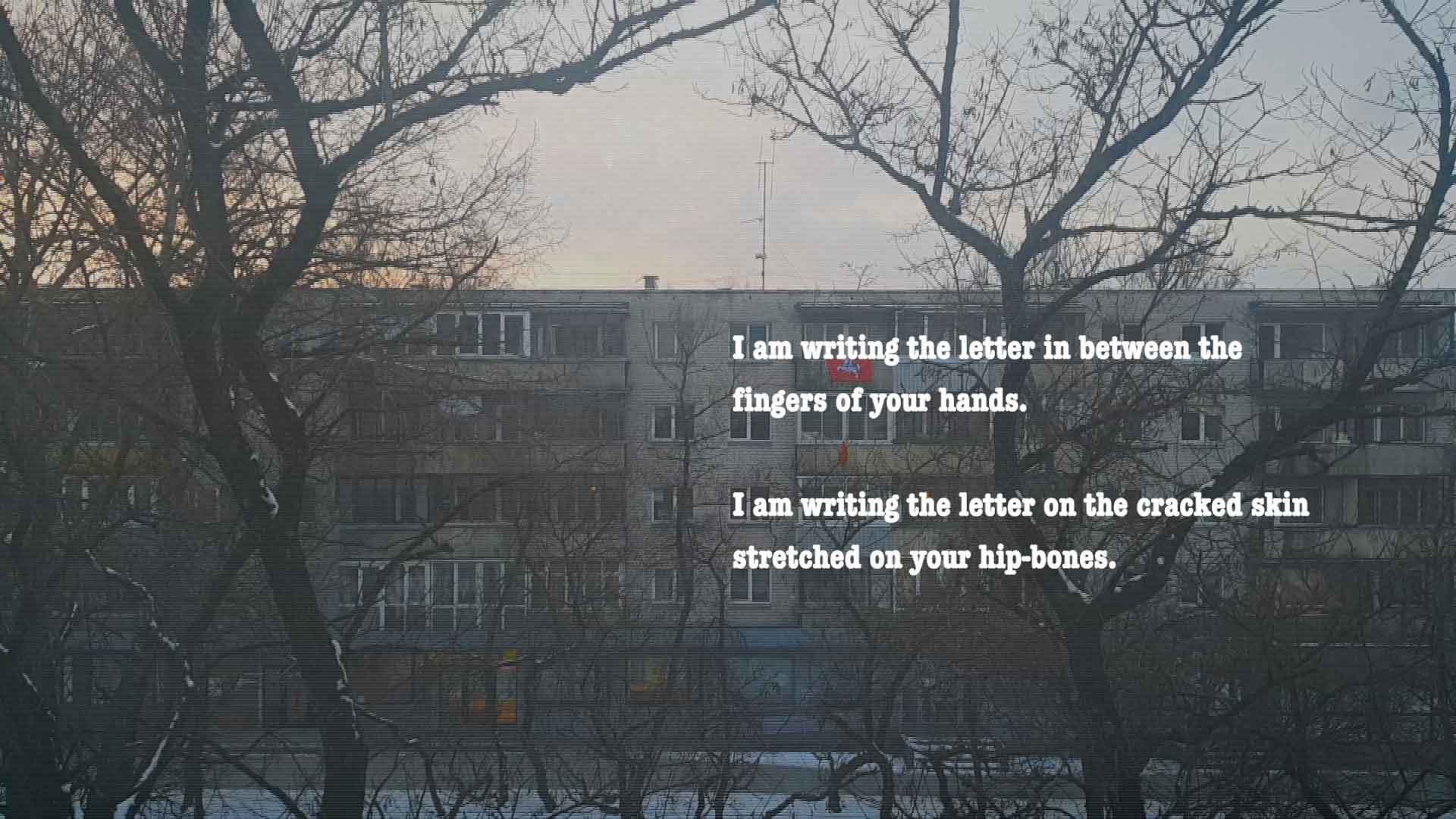 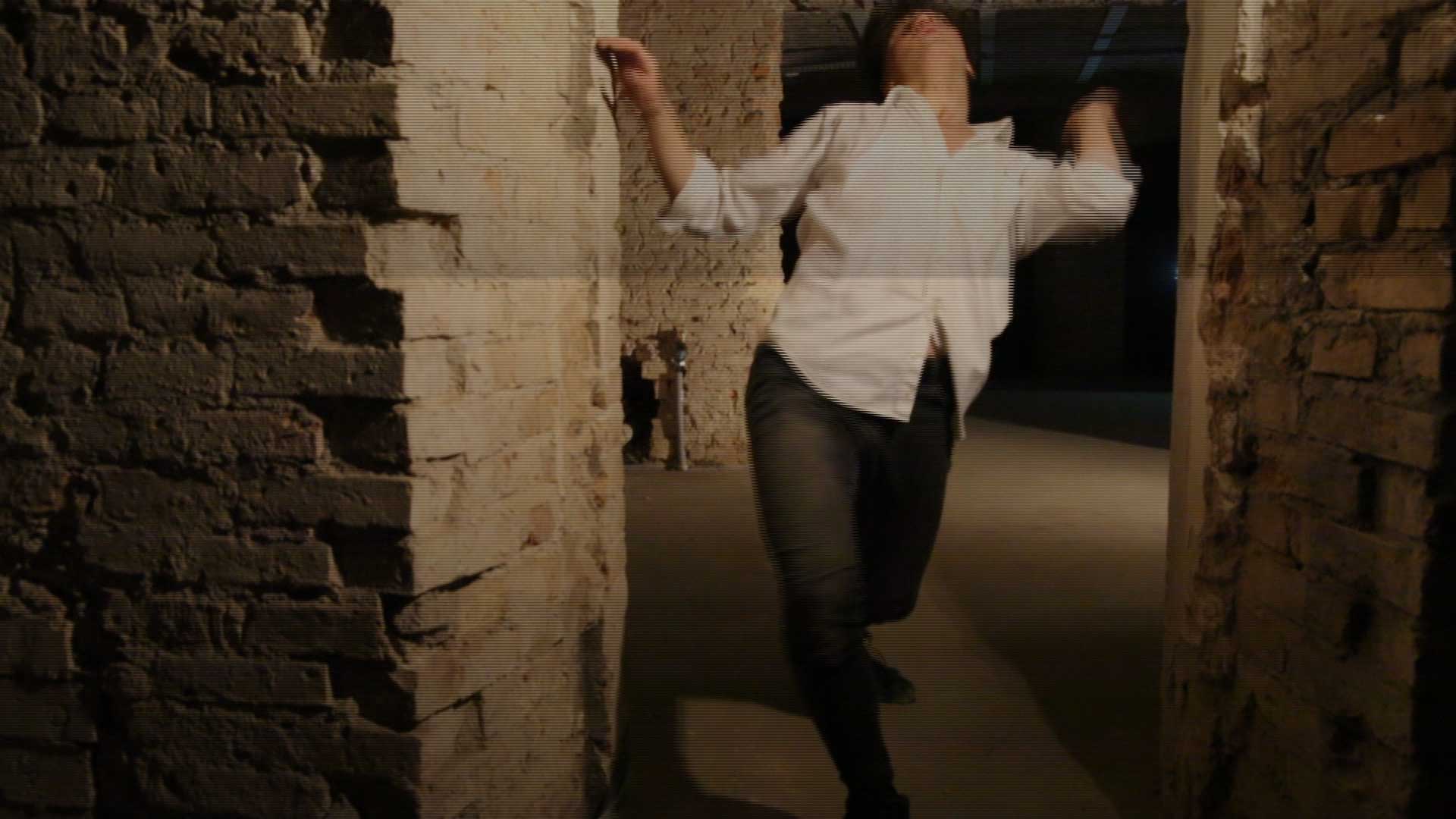 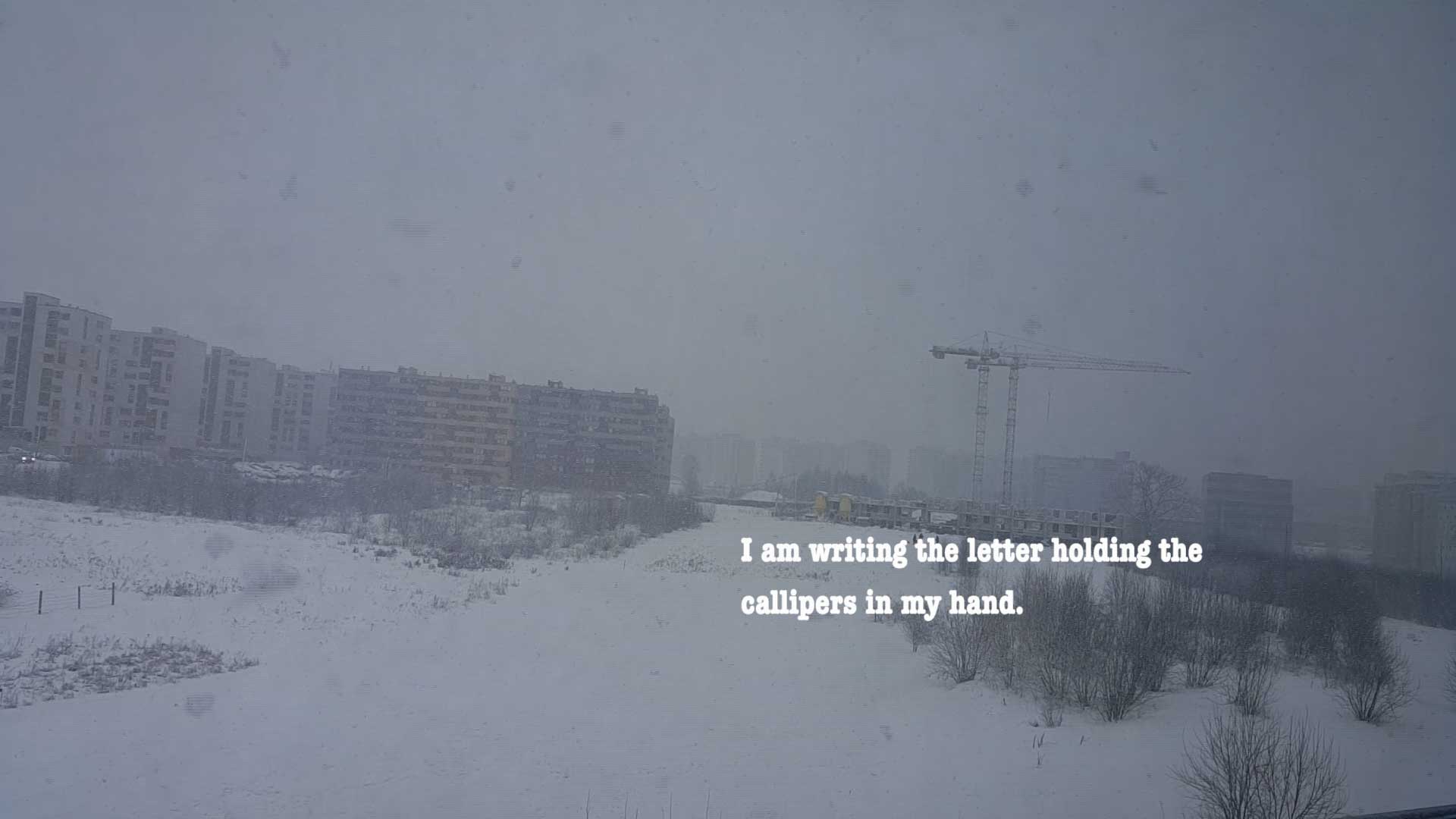 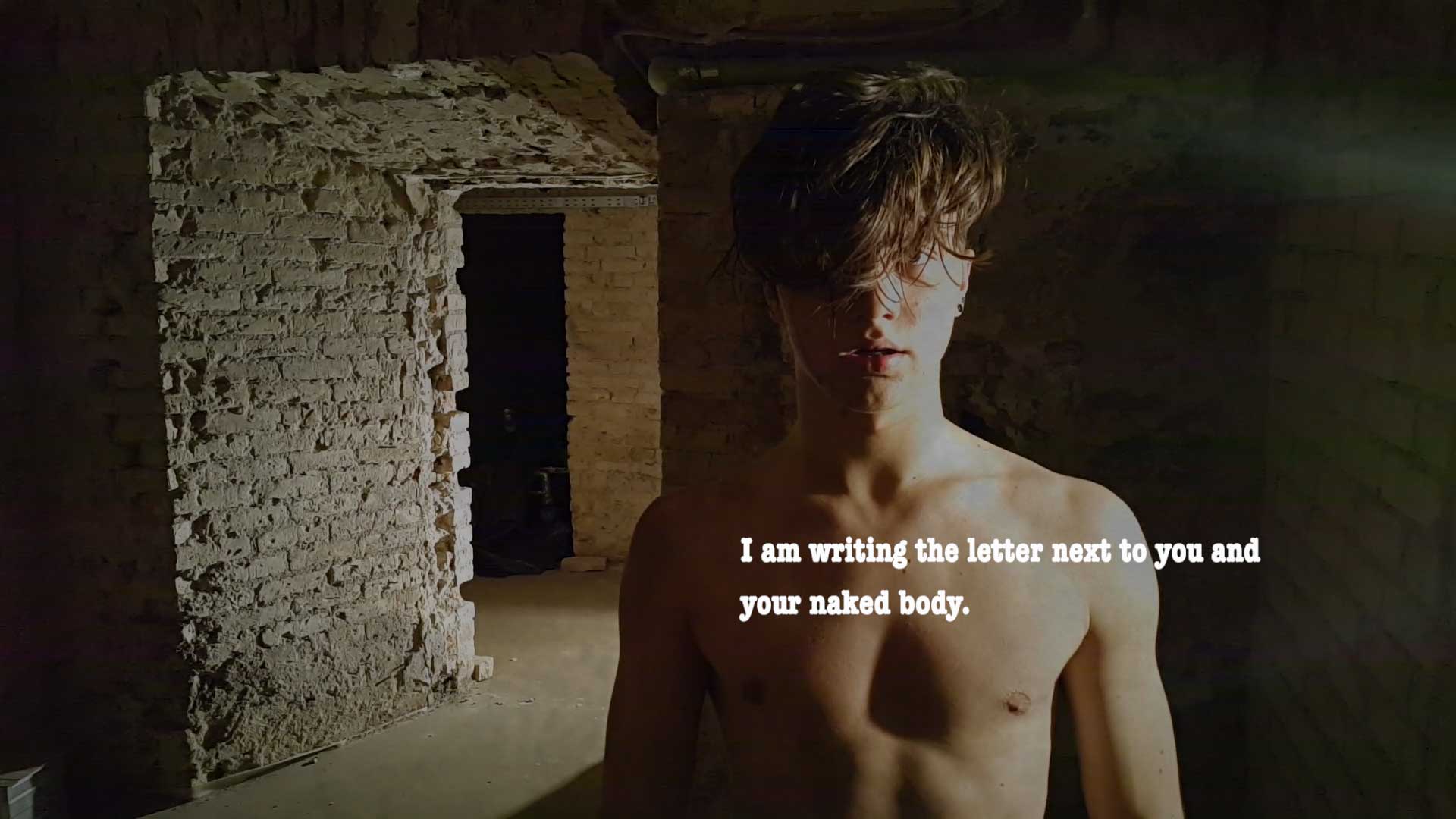 The dancer of the movie Denis Stech noticed that he was glad to start working with the great artist R. Venckus. Participation in this film was a great experience to him because he had to dance only once in accordance with the music composition. Dancing in a small cellar was a big challenge, however, he thought everything was pretty good. D. Stech expressed his thanks to R. Venckus for the opportunity to be part of the exhibition in Berlin and he hoped that that was just the beginning of their future cooperation!

Assoc. Prof. Dr. Remigijus Venckus is Head of Department of Entertainment Industries at Vilnius Gediminas Technical University and Associate Professor of media arts. He defended Ph. D. in humanities at Vilnius Art Academy in 2014. Over the past 14 years he has worked in High education and delivered the subjects of media arts, culture and communication. Outside the academic life, Venckus is pursuing an experimental photographer’s career, where the main topic is based on self-analysis and its evaluation in public. Venckus is the author of forty-seven personal art exhibitions, a participant in thirty-eight international art events and a curator of thirty-one international media art exhibitions in Lithuania.

Klaus W. Eisenlohr. Based on photography, film and new media in practice and theory, Klaus W. Eisenlohr is concerned with urban changes, and relations between private and public space. The photographic image becomes a signifier for urban space and its potential use. With public interventions, his art practice becomes a way of direct communication. In his film essays he takes the viewer on discourses of spatial iconography and people’s relations to urban space. He has been working on film and art projects concerning public space in Gropiusstadt Berlin, Marzahn-Hellersdorf Berlin, Istanbul, Helsinki, Poznan, Hannover and Chicago. Screenings include San Francisco, Saint Petersburg, Innsbruck, Berlin, Chicago, Telluride, Hannover, Poznan, Helsinki, Stuttgart, and Reims. As artist-curator at The Berlin International Directors Lounge, a media art festival based in Berlin he is selecting the Urban Research program and organizes monthly screenings. Klaus W. Eisenlohr is Lecturer at Photocentrum of Gilberto-Bosques-Volkshochschule Friedrichshain-Kreuzberg, Berlin. 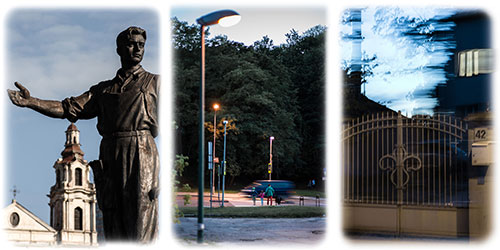 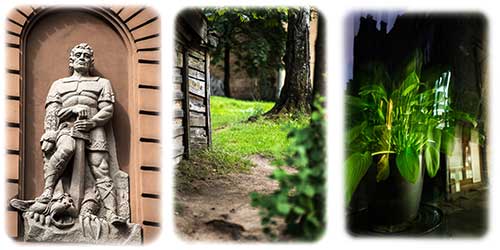 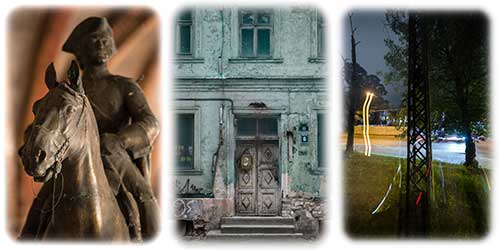 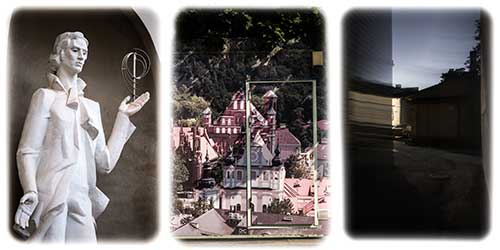 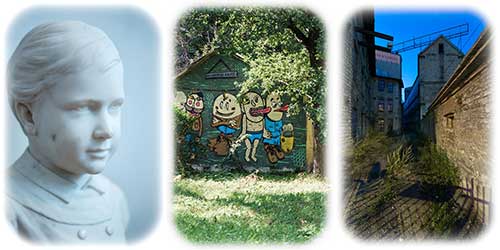 Poetry From the Movie

I am writing the letter holding the callipers in my hand.

I am writing the letter next to you and your naked body.

I am writing the letter in between the fingers of your hands.

I am writing the letter on the cracked skin stretched on your hip-bones.

I am writing the letter while drawing the borders of the world with the callipers.

I am writing the letter through the cut off, torn off, dismembered, interrupted tongue of your song.

I cut you through with the callipers.

I  disfigure you with the callipers.

With the callipers I measure the depth of your eye-sockets.

With the callipers I dissociate your nipples.

With the callipers I prick your lip lines.

With the callipers I pin, hang, hook, unhook the skin.

The writing handwriting is writing me.

The writing is poisoning me.

The writing feeds upon me.

The writing leads me blind through the page of the book.

The writing dismantles me, tears me down, overtakes me, swallows me, eats me up and ruminates me tenderly again.

I fall in love with the spike of the callipers.

I fall in love with the sundial.

I fall in love with you like with the handle of the sundial.

I fall in love with you stuck in the blossom of the polar night.

Documentation of the Opening Show 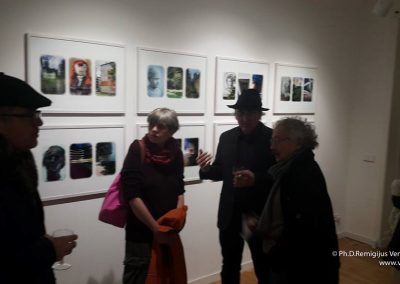 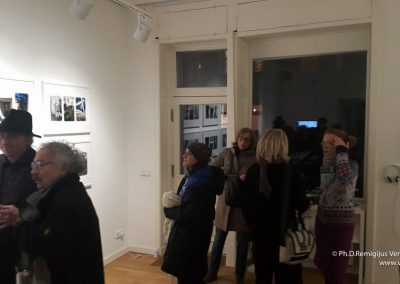 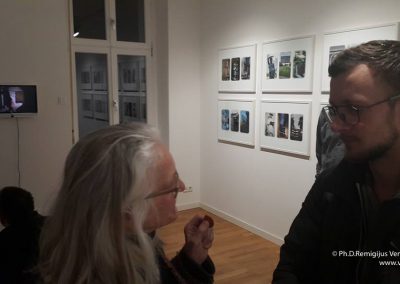 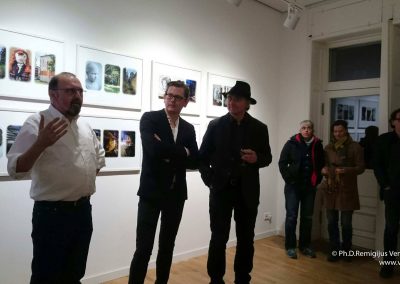 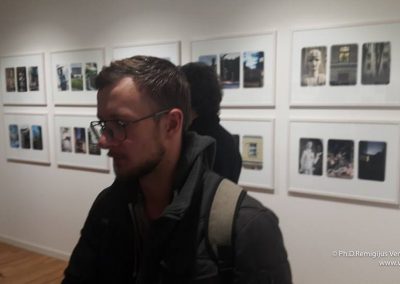 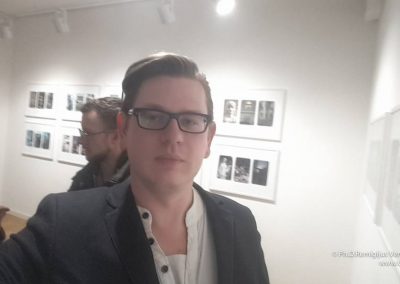 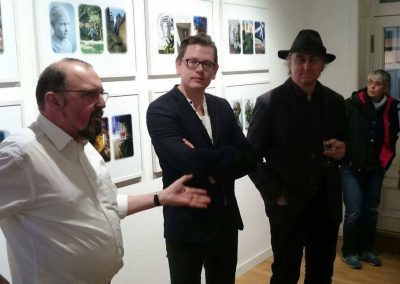 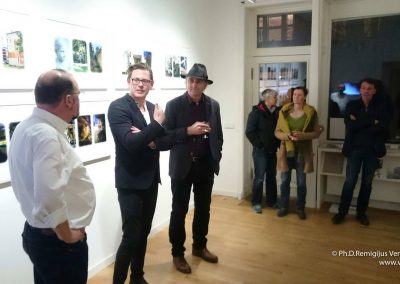 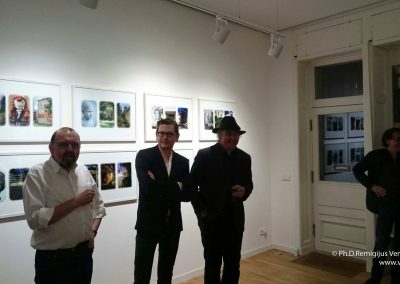 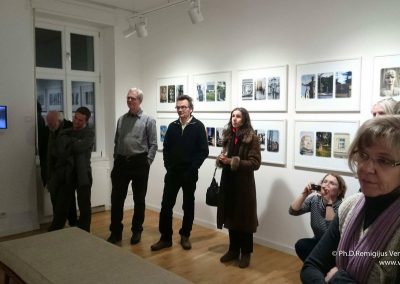 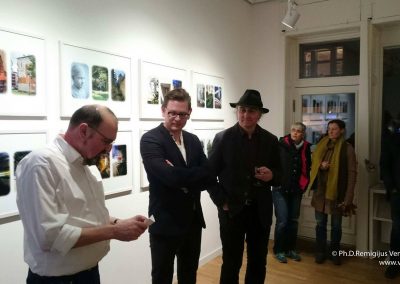 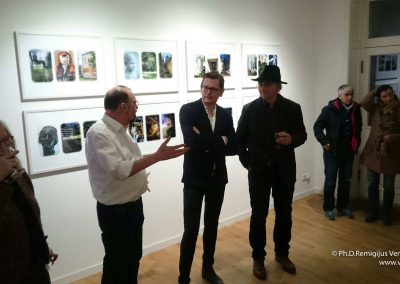 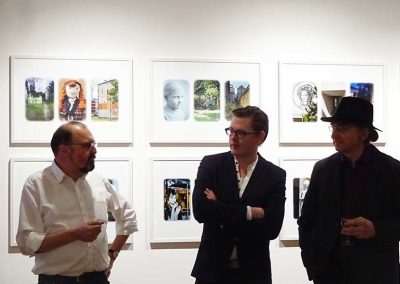 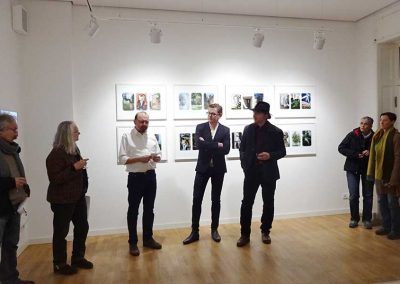 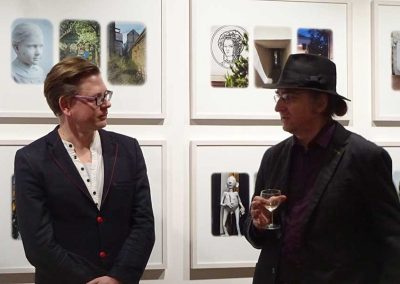 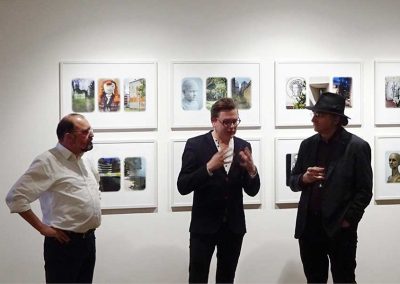 Would you like to know more about solo exhibitions?